About the Saluki breed

Although the breed appears graceful and fragile, don’t be fooled – the Saluki is an avid hunter and possesses the strength and endurance to chase quarry over long distances and difficult terrain. Today, this sight hound is popular at lure coursing events and in the show ring. Salukis can be coated (with feathering on the ears and tail) or smooth. In both varieties, colors include white, cream , grey , fawn , golden , red , grizzle , tricolor, black & tan , white with spots (Parti), black with white on the chest and brindle with white .

A Look Back
The royal dog of Egypt, the Saluki is perhaps the oldest known breed of domesticated dog. They were held in such great esteem that their bodies were often mummified like the bodies of the Pharaohs themselves. The breed was originally used by the Arabs to track and bring down gazelle, the fastest of the antelopes and hares . When the Saluki was first imported to England in 1840, they were used primarily to hunt hare mostly . The first breed standard was written at 1923 in England and sense was changed few times .
Independent and cat-like, the Saluki is a typical hound – he can be taught obedience, but requires patience and consistency from his owner. The breed will instinctively run after anything that moves, so they must be kept on leash or in a safe area during their daily exercise. A clean breed, Saluki coats shed little, but they still require weekly brushing . Salukis need to exercise daly and then they are very calm at home .

Saluki do not feet for living out side and needs to be close to their humens .
As puppies they need alote of exposure to the real world to grow up with stable nature and good personalety . They r very loyal . Even that alote would say that saluki is not a dog for family with children , I would say they are ! 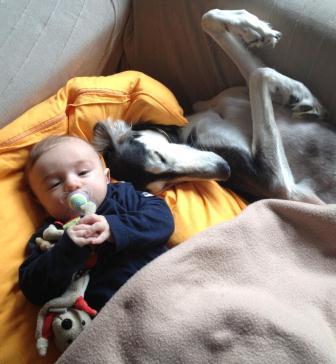 Both saluki and baby pic r by Bianca Kussberger , Germany and the salukis are both from Neshama Tova breeding <3
The saluki history goes back about 10000 years ago what makes it even harder to summarize , there for , u have many links to movies and written info below  . The breed was called in few names between them Gazelle houns , Parsian Greyhound , royal dog of Egypt , El Hur (means "nobel") and many more . The salukis were mentioned in the Jewish bible and Islamic Qur'an . Possible to find alote of proofs for the breed being there for a long time between them mummified salukis , sculptures and paintings .

People who don't know the breed would say that salukis looks thin , but for saluki to be in good shape , it is even recomended that 2-3 ribes will be showen . To every little thing in the saluki structure there is a reason , when u thin it is easyer to run faster , the almond small eyes - for not having easly eye infection from the desert sand , the deep chest for having place for a big heart who could "work" when they are in full speed action and so on .
Salukis are known for not having a "doggy" smell and for not arouse ellergies .
Health - some "western" lines have heart problems , eye problems and thyroid problems - this days it is very commen to check those 3 things before breeding . I think that one of the reasons for those problems , to come up are that the breeding population of the breed , was small and include not enough options . The beduins were always on the move , what gave them more opportunitys for new blood lines or exchanging salukis between them .
The beduins didn't had much options for taking care of the weak once and there for , only the strong and healthy were survived long enough to be breed from .
HOPE U WILL ENJOY THE REST INFO BELLOW   , if you have any more ideas for links I could add , I would love to read from you at [email protected]
Saluki info in movies from You-Tube
Link to a short Animal planet movie on YouTube
Link to "dogs 101 - saluki" 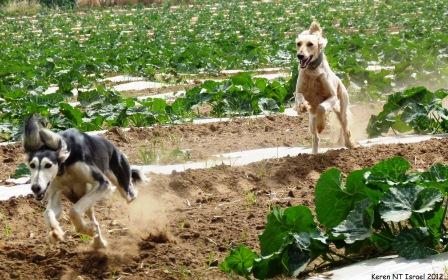 The Saluki, royal dog of Egypt, is perhaps the oldest known breed of domesticated dog. They are identified by some historians as "a distinct breed and type as long ago as 329 B.C. when Alexander the Great invaded India." Earliest known carvings look more like Salukis than any other breed: they have a Greyhound body with feathered ears, tail and legs. This same exact hound also appears on the Egyptian tombs of 2100 B.C. and again in more recent excavations of the Sumerian empire, estimated at 7000-6000 B.C. The Saluki was so esteemed that his body was often mummified like the bodies of the Pharaohs themselves. The remains of numerous specimens have thus been found in the ancient tombs of the Upper Nile region.

As the desert tribes were nomadic, the habitat of the Saluki comprised the entire region from the Caspian Sea to the Sahara. Naturally the types varied somewhat in this widely scattered area-mostly in size and coat.

Salukis were first brought into England in 1840 and were known as Persian Greyhounds. There was no real interest until the Hon. Florence Amherst imported the first Arabian Saluki in 1895 from the kennels of Prince Abdulla in Transjordania.

Having tremendous speed, the Saluki was used by Arabs principally in bringing down the gazelle. In England, the dog was used largely on hares. Regular coursing meets are held with judging based on ability to turn quickly and over take the hare in the best possible time. The Saluki hunts largely by sight although he has a fair nose.

The Saluki was a well-established breed in England for a number of years before he began to come into his own in this country. It was not until November 1927 that the breed was officially recognized by the American Kennel Club.

The standard is from the AKC home page